Goshen was once inhabited by Indian tribes such as the Cherokee and Shawnee, but in the 18th century, European settler, Alexander and his Scottish wife, Anna Dunlap (MacFarlane) moved to the Calfpasture Valley with their four children, who first lived on Alleghany Hill and built a brick house on Furnace Hill in 1745. A few of the first settlers include, Bratton, Lockridge, Graham, Carter, and Davis. Land was bountiful and sold for 33 1/3 cent per acre. James Patton and John Lewis developed the area. The first mill was built around 1745 by James Carter (Morton). Corn was the main crop grown on the fertile bottom land. It seems to have been on the Calfpasture that in 1755 Charles Knight was to have $60 for teaching one year, every half Saturday or every other Saturday to be free time. In case of an Indian alarm, Knight was to have the privilege of being lodged in the neighborhood. It is not probable that he was the first Teacher. Corn was the main crop grown by Squire Joseph Bell, Jr. who was living in Goshen at Cameron Hall by 1817 when he was elected a Justice of the County Court, and in 1830 when his home was a polling place. He produced such rich crops the land was said to be like “The Land of Goshen” in the Bible, thus when the railroad went through in 1855, the name “Goshen” was used for the station. By 1860 the landowners around Goshen (including Panther’s Gap, Big River, Bell’s Valley and Little River) were named Abrahams, Ayers, Bear, Beeson, Bell, Davis, Epherd, Ewell, Frazier, Glendie, Graham, Hepler, Hodge, Hogue, Judy, Kelso, Lair, Martin, McCutcheon, McKenzie, Miller, Moore, Ptomey, Roadcap, Sloan, Sterrett, Stoner, Walton and Wilson.

Victoria Furnace, where part of the foundry towers still stand today, was built by an English company in the 1870’s and named for Queen Victoria. It turned out an average of 150 tons of fine grade ore per day, according to H.P. Greaver. A railroad was built to haul ore from the mines on Bratton’s Run. The company built houses for their workers, some on Furnace Hill. On the Furnace grounds was a two-story building housing the commissary and theater. The furnace operated until the end of World War I. E.M. Hull purchased most of the property, and sold the rail track to C&O, the trains for scrap iron, and the land to Stillwater Worsted Mill, and the Appalachian Wood Preserving plant.

In 1884, Goshen was charted as a town. A real-estate and industrial boom company, the Goshen Land and Improvement Company was organized in 1890, selecting Goshen station as a site for the laying of and founding of a new city. The newly formed company built Goshen’s metal-truss bridge, and bought Cold Sulphur Springs Hotel, Victoria Furnace, as well as a considerable amount of property in town. Plans for the town included a car works, rolling mill, plaining mill, iron works factory, machine company, tube works and a bottling works. Most of these plans never developed and many people invested their life savings in these businesses, only to find they had lost everything with the depression of 1893. The Goshen Land and Improvement Company built the Alleghany Hotel in 1891 to serve as a resort near Goshen station. The hotel was nicknamed “The Palace” a story-book palace presumed to be the grandest hotel in the area. It was designed by Stanford White at a cost of $215,000. The hotel changed their name to Alleghany Inn 2 years after it was built. The cold Sulphur springs in Goshen supplied one of the best white Sulphur healing waters in America and were on draught at the resort. After the coming of the automobile, by 1920, resort hotels began to decline and in 1923 the Alleghany was sold to a group of doctors for a sanatorium. During renovations, it caught fire and burned. On Thanksgiving Day 1923, the Palace was burning ruble and its once graceful furnishings were in ruins. 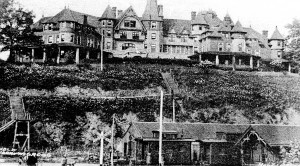 “All gave some, some gave all, This monument stands in tribute to Goshens contribution to the greatest generation.”

During the onset of World War II, Goshen residents saw off 198 recognized soldiers to fight for their country.  While some returned and some did not, Goshen memorializes the brave men and women who risked life and limb for peace and humanity.  Standing proudly facing the Town Hall on Main street, a World War II memorial lists veterans and those killed in action. 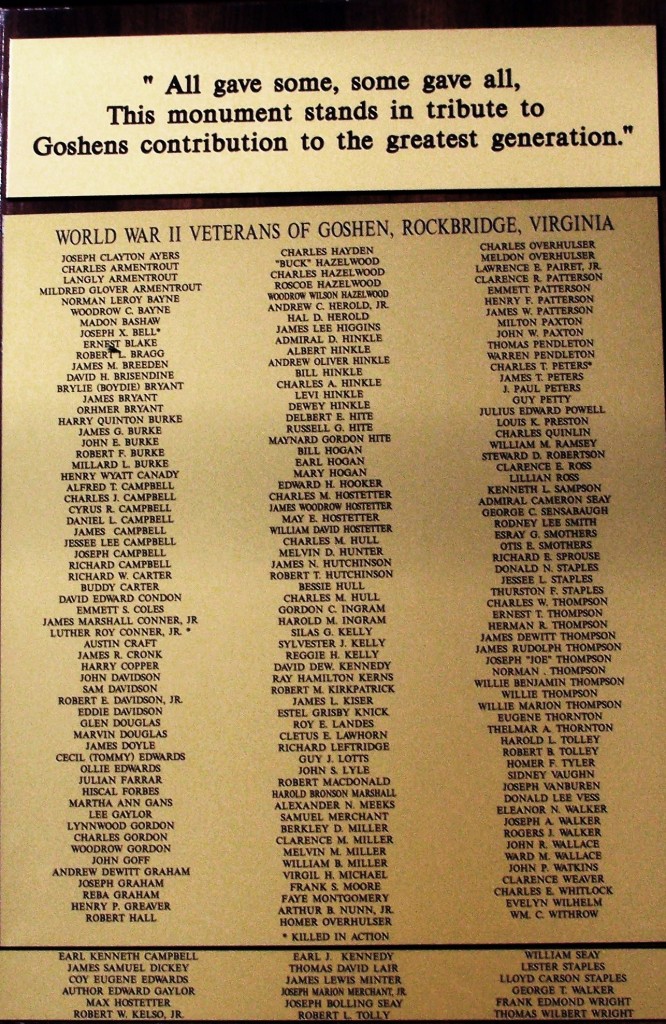